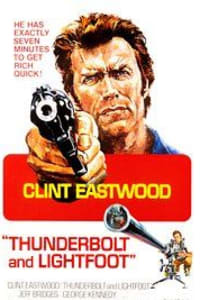 As a young ne’er-do-well named Lightfoot (Jeff Bridges) steals a car, an assassin attempts to shoot a preacher delivering a sermon at his pulpit. The preacher escapes on foot. Lightfoot, who happens to be driving by, inadvertently rescues him by running over his pursuer and giving the preacher a lift.

The Mirror Has Two Faces

The Door in the Floor