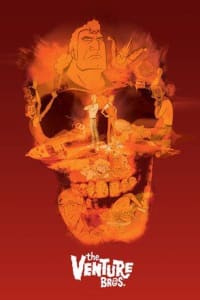 The Venture Bros. is an American animated television series which is considered to be an action/adventure series that mixes comedy and drama. In season 4, questions are answered and truths are revealed. Brock finds himself aboard one of the O.S.I.’s medical units, particularly their brainwashing unit, and with H.E.L.P.eR’s head lodged in his chest.