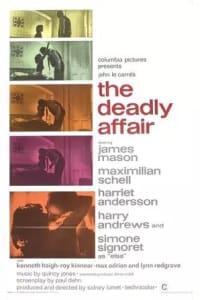 In London, Charles Dobbs (James Mason) is a staid MI5 operative investigating Foreign Office official Samuel Fennan, a former Communist who apparently commits suicide. Dobbs becomes suspicious when a wake-up call is made to Fennan’s home the next morning. While his widow Elsa says it was for her, this is discovered to be a lie.

Before the Devil Knows You're Dead