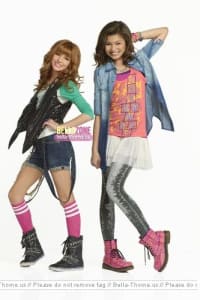 Synopsis Shake It Up - Season 1

Shake It Up is an American sitcom revolves around two best friends, Rocky Blue (Zendaya) and CeCe Jones (Bella Thorne). In season 1, Rocky Blue and CeCe Jones become dancing stars on their favorite show Shake It Up, Chicago with the help of Rocky’s older brother, Ty and the girl’s closest friend Deuce Martinez. Besides their career, they have to deal with the disadvantages, such as keeping up with school, watching out for CeCe’s younger brother, Flynn, and dealing with other issues that involves with the show. Howw can they solve these problems?

Mostly Ghostly: Have You Met My Ghoulfriend?

I Still See You

Conrad & Michelle: If Words Could Kill