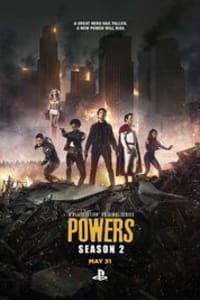 In a world where humans and superheroes called “Powers” co-exist, a former Power, Christian Walker, has reinvented himself as a homicide detective after his own powers were taken from him. He and his partner Deena Pilgrim work for the Powers Division of the Los Angeles Police Department, investigating crimes involving superhumans, who are at once crimefighting heroes and pop celebrities managed by specialized advertising agencies.