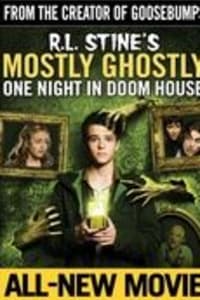 Mostly Ghostly: One Night in Doom House is a 2016 horror comedy fantasy film based on the third book of the same name by R. L. Stine and the third installment of the Mostly Ghostly film series. It is about Max Doyle takeing some objects from a haunted house to help his ghost friends Nicky and Tara, upsetting a whole bunch of spirits in the process.

Gamer's Guide To Pretty Much Everything - Season 1