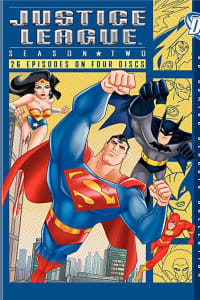 Justice League is American animated series about a team of superheroes. Season 2 opens with the League tricked into defending Apokolips, Darkseid’s homeworld, against the threat of Brainiac. The team solicits the aid of the New Gods, including Orion, Lightray, and Highfather. The resulting destruction of Brainiac’s base is thought to be the end of Darkseid.