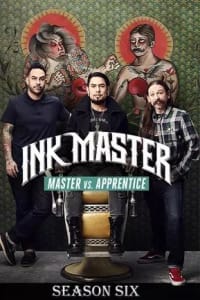 The sixth season of the tattoo reality competition Ink Master (subtitled as Ink Master: Master vs. Apprentice) premiered on June 23 and concluded on October 13, 2015 with a total of 16 episodes. The premise of this season is to feature mentors and their apprentices as they compete against each other in an elimination-style competition with a $100,000 grand prize.