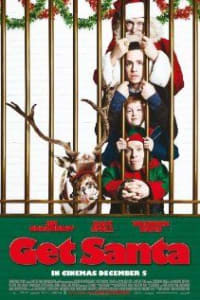 Written and directed by Christopher Smith, this comedy drama tells the story of six-year-old Tom, who finds Santa in the garden shed. He’s crashed his new sleigh in a London park, lost his reindeer and is arrested by the police. Now it is up to Tom and his father Steve to get Santa back and save Christmas for everyone.

I Give It A Year

Around The World In 80 Days

Harry Potter And The Half-Blood Prince

The Sense of an Ending