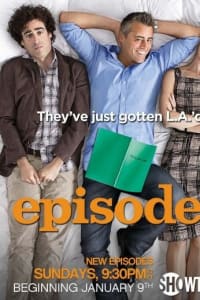 After happily married couple Sean (Stephen Mangan) and Beverly (Tamsin Greig) Lincoln win yet another BAFTA Award for their successful British sitcom, Lyman’s Boys, they are persuaded to move to Hollywood and remake their series for an American audience. Unfortunately, the network starts to make changes and pressures the couple into casting Matt LeBlanc in the lead role.