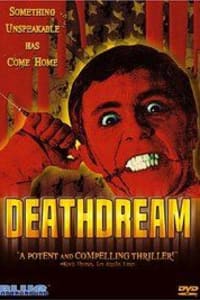 In Vietnam, US soldier Andy Brooks is shot by a sniper and falls to the ground. As he dies, he hears his mother’s voice calling out, “Andy, you’ll come back. You’ve got to. You promised.” The voice becomes sinister and muffled as Andy’s eyes close. Sometime later, his family receives notice of his death in combat.