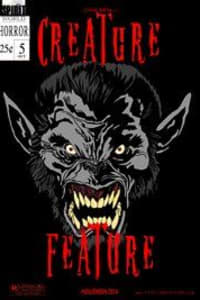 The humorous Bearer character was a pun-spewing, bad-joke-telling host who spoke in a gravelly voice with a halting speech pattern. His usual attire was a long-tailed vintage tuxedo with his hair parted down the middle and slicked straight down the sides, with heavy mascara and grease paint.

Godzilla: King of the Monsters

The Haunting of Bloody Tower