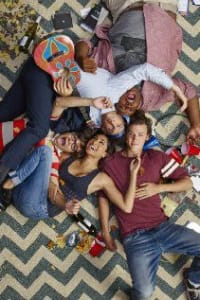 The first is story of Cooper, Barry, and Neal. They move into their new apartment and have a wild housewarming party, during which their new television is stolen in 2011. Two years later, Barry steals back this televission. At a basketball game, Cooper is recognized by the UFC guys and kidnapped, so…