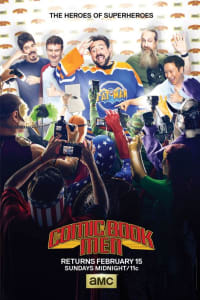 AMC’s Comic Book Men are back for a fourth season of antics and fun. Join Kevin Smith, Walt, Bryan, Mike, and Ming as they banter behind the counter of their Red Bank, New Jersey comic store, reminisce about exciting adventures and stories during their hilarious podcast, and geek-out over iconic celebrities and the rare pop culture memorabilia that customers bring through the doors.

Madness in the Method

Jay and Silent Bob Strike Back