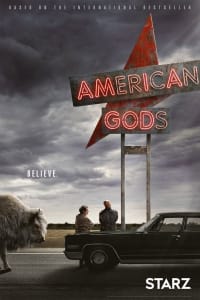 When Shadow Moon is released from prison, he meets the mysterious Mr. Wednesday and a storm begins to brew. He becomes bodyguard and traveling partner to Wednesday. But in truth, Mr. Wednesday is a powerful old deity, on a cross-country mission to build an army and reclaim his lost glory.