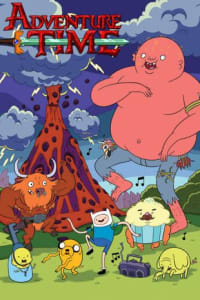 The sixth season of the American animated television series Adventure Time, created by Pendleton Ward, began airing on Cartoon Network in the United States following the series' fifth season.The season follows the adventures of Finn the Human, a human boy, and his best friend Jake, a dog with magical powers to change shape, grow, and shrink at will. Finn and Jake live in the post-apocalyptic Land of Ooo. Along the way, they interact with the other main characters of the show: Princess Bubblegum, The Ice King, and Marceline the Vampire Queen. Common storylines revolve around Finn and Jake discovering strange creatures, dealing with the antagonistic but misunderstood Ice King, and battling monsters in order to help others. This season’s main story arc, however, deals with Finn discovering the true identity of his human father, and his subsequent attempts to reconnect with him.