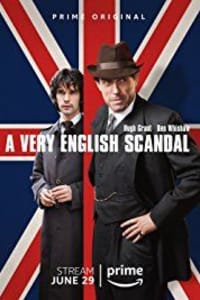 A Very English Scandal is a British three-part television miniseries based on John Preston’s book of the same name.[1] The series premiered on BBC One on 20 May 2018. In this, British Liberal Party leader Jeremy Thorpe is accused of conspiracy to murder his gay ex-lover and is forced to stand trial in 1979.

Prick Up Your Ears

The Lady in the Van

Perfume: The Story Of A Murderer